We do make every effort to proactively notify you of promotion opportunities, however your help in this area will go a long way to making sure you are awarded the rank you've worked for.

Basically the higher the rank, the more often you'll need to be playing in game and the more tasks you'll be asked to participate in.

Members may NOT automatically be promoted to ANY rank. Please remember that promotions are a privilege not a right. Thanks!

You can also check the Guild Welcome Center area of the Guild Hall for books that outline the requirements for promotion to each rank. We place those books in game for your quick reference convenience. 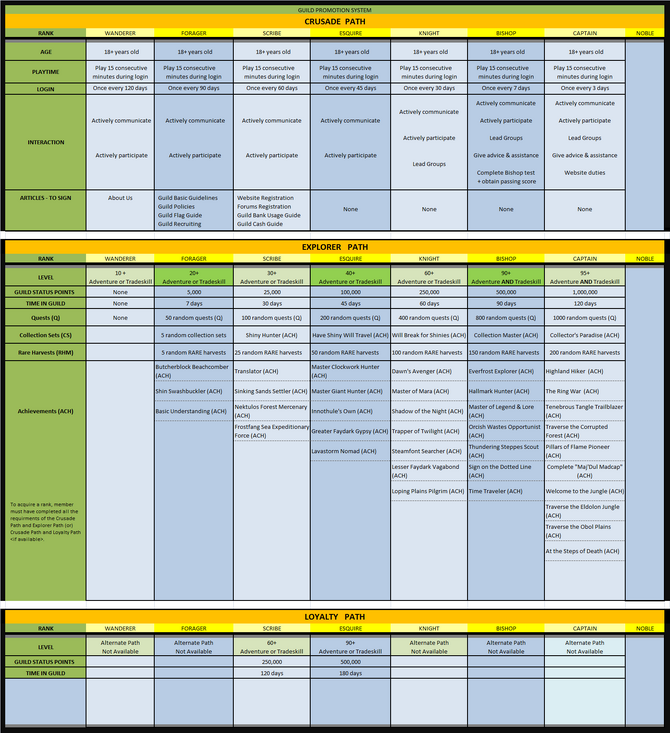 (a) Retributions Blade reserves the right to revoke membership from any player, at any time, for any reason. We do expect to retain all members on the guild roster as long as it's beneficial to each party and while game mechanics allow.

(*) Not all ranks may offer a Loyalty path.  In order to obtain a promotion, all members must successfully complete either:

GSPs or "Guild Status Points" (not to be confused with "Personal Status Points" are viewed on the Guild Screen which can be reached by pressing the "U" key on your keyboard and are found under the Status Column for each of your characters that are enrolled/affiliated/joined with Retributions Blade. These "guild status points" (often referred to as "G-stats") are based on EACH character and are not based on the account they are created under.

On September 1, 2013 a path promotion system was developed for guild ranks.  Scribe (Jr Member) and Esquire (Member) ranks offer an additional promotion path called the "Loyalty" path.  This Loyalty path gives players (depending on their playstyle and personal preference) the opportunity to choose between either an Explorer based path or a Status based path when working towards promotion.   These two paths are separate and distinct and may not be "inter-mixed".  When reviewing the paths for a rank that offers both Explorer and Loyalty paths, players should decide which is most suited for their character and work towards achieving all objections outlined within the specified path.  Once a player completes all the pre-requisits of a particular path, they should apply to a Guild Captain or Noble for promotion.  Players may switch between paths at any time however accomplishments completed for one path won't count towards the other path.  To prevent extra work it might be better to review both paths and make a decision prior to setting out on a particular promotion path.

HYPERLINK USAGE (Please review before clicking links on this site)

Content found within this wiki website (including images) are considered to be released under the CC-BY-SA 3.0 License and the GFDL.
See the Terms of Use for further details

Retrieved from "https://retributionsblade.fandom.com/wiki/Guild_Ranks?oldid=25624"
Community content is available under CC-BY-SA unless otherwise noted.